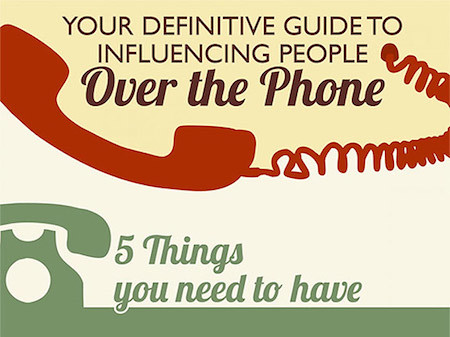 OK, call it “phone selling.” You probably do it whether you realize it or not. You may not work on commission (or you might), but almost certainly there are times you need to move someone to action via telephone.

That’s where this infographic comes in. I’ve looked it over in detail, and realized it’s really about effective communication. Tada! Few of us (including me) use the phone effectively.

I’ll be honest. When I was in the newspaper business, I often would spend a half day getting in the car and driving across town to talk to someone face to face rather than spend 10 or 15 minutes on the telephone. It’s still my least favorite form of communication. Even now, I’d rather talk face to face or via email. The “halfway” of only hearing someone without being able to see the other person at the same time bugs me.

This may seem particularly strange given that I spent several years of my life working in radio–but I was only talking, rather than listening to a disembodied voice.

Still, the telephone remains for me the most common way of interacting with people at a distance. I’m sure that’s the case for a lot of folks, despite the fact that more and more young people prefer texting to telephoning.

So it makes sense to apply the insights from this infographic. It not only will make your interactions more effective; I suspect it will reduce telephone reluctance as well, since a lot of that (probably) comes from lacking confidence in knowing that you know what to do.

Help The Princess get a ride?
Logging In...