Communication lessons from my daughter 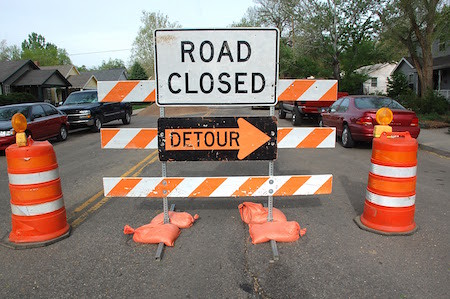 I’ve mentioned my special needs daughter here before. I don’t talk about her here a lot, although in many ways she is the center of my life, because the focus of this blog is on communication skills. But every once in awhile these major areas of my life intersect. Today is one of them. Here are some things Hannah is reminding me of today.
END_OF_DOCUMENT_TOKEN_TO_BE_REPLACED

Communication is always important, of course, but it’s especially important in a crisis. There have been no posts here for a week or so because we’ve been dealing with our own crisis, but there was plenty of communication going on.

We live in East Tennessee, where six Red Cross shelters opened up because of people losing power or water during a weeklong battle with ice. Snow and freezing rain fell several times, and the temperature did not go above freezing for nearly a week. END_OF_DOCUMENT_TOKEN_TO_BE_REPLACED

A difficult holiday? Make your own meaning!

Warning: I’m going to get personal with you a bit.

Communication happens in funny ways. Meaning comes from people, not from circumstances, but people inevitably create meaning around circumstances. Depression around Christmas is well-known. For me, Father’s Day is a very mixed holiday.

Part of it is something I share with lots and lots of people: my own dad died in 2002. I miss him a lot. So Father’s Day calls up both his absence and my gratitude for his presence for as long as I had him. END_OF_DOCUMENT_TOKEN_TO_BE_REPLACED

I’ve been thinking a lot lately about the difference between being humbled and being humiliated. END_OF_DOCUMENT_TOKEN_TO_BE_REPLACED

Tennessee wants me or my daughter dead

Hannah snoozes, with no idea of the danger she faces.

The state will not be satisfied until either I or my daughter is dead.

That may not be the intent, but that is the effect.

(My apologies that this is not the usual communication-related post. I have decided to go ahead and share through this blog, though, because it helps explain why I didn’t get my usual post up mid-week.)

You see, my nine-year-old daughter is severely disabled. Hannah cannot close her airway (so anything that goes down her throat will go into her lungs), cannot sit up, cannot roll over on her own. She eats through a tube and breathes through a trach, and has to be suctioned every 10 minutes or so to avoid suffocating on her own saliva.

Although our primary insurance would much prefer to pay for home nursing care, since they know it’s cheaper than paying for hospitalizations, the way the policy is written with my employer (which happens to be the state of Tennessee, ironically enough), they cannot pay for it.

During her first four years of life, she was hospitalized 22 times, with the longest stay being 58 days. We did our best to take care of her, but the simple reality is that I cannot work all day and also take care of my daughter 24 hours a day. My wife is partially disabled, and can do little hands-on care for Hannah because of her severe arthritis in her back and hips as well as fibromyalgia. So she was frequently in the hospital with respiratory infections or other challenges.

But when we finally got her on TennCare (Tennessee’s version of Medicaid), which paid for her nursing, she was only hospitalized five times in five years, most of them one-day stays, with the longest being five days. Because the nurses are with her all the time, they have been able to catch issues while they were still small and get them addressed before having to take her to the ER or put her in the hospital.

The state’s other solution would be to take Hannah away from us and put her in a nursing home, and surely no one believes that she would get suctioned there every 10 minutes. She requires meds and breathing treatments around the clock, in patterns that don’t fit the typical schedules of nursing home. She will die in that situation, and it will cost the state much more than what it costs to pay for nursing.

She cannot live without someone with her all the time. She has to have the nursing to live, and obviously home nursing is the cheapest and most effective solution.

But the state has said I make too much money to qualify Hannah for TennCare, and they are going to kick Hannah off. They don’t care that we had to skip meals last month because we ran out of money. They don’t care that I finally sold my high school ring to get enough money to pay for gasoline so I could keep going to my job. If I get a second job, it will bring more money into the household, which will raise the floor for her to get insurance, and it will all go to pay the new uncovered medical bills–in other words, we will go hungry just as often, although I would be working twice as hard.

In light of that situation, it’s easy to understand that we have no savings. If we had savings, the state would have kicked her off sooner, because we had too many “assets.”

The state says that in order to get Hannah back on nursing care, we have to have about $4,000 in unpaid medical expenses. Nursing costs about $1,000 a day (vs. $10,000 a day for a hospital), so we will requalify after only four days, but how can we afford to do that? We don’t have the ability to pay the bill that would follow, so we would be forced into bankruptcy.

Reading between the lines, it seems there is a possibility I could save my life and my daughter’s by divorcing my wife. Then my income would not be a part of the household, and the child support would not be enough to bump her household income above the cutoff.

So I suppose I should add to the first paragraph “or until my family is shattered or we are forced into bankruptcy.”

Most other states have what is called a Katie Beckett Waiver–basically, that means to qualify for Medicaid insurance, you have to show that you would have the required expenses without the Medicaid coverage. Tennessee is one of the few states that does not have such a waiver. The waiver not only would save us the expense, but would also save the state the expense of going through the convoluted process of reapplying for TennCare. But that would be too sensible.

I fear that my daughter will spawn another article like this one and that I will wind up being the one to write, “Tennessee kidnapped and murdered my daughter.”

Insurance is supposed to protect you against catastrophe. Instead, health “insurance” limits care so that everyone can have their doctor visits covered, and so the ones who truly need insurance against catastrophe must go without.

I can’t blame the individuals who have tried to help me through various state agencies. They can’t help it. This is the way the regulations are written.

Is there someone, somewhere, who is able to do something about this situation who gives a damn? Or must we become another in the long list of victims of a bureaucratic, broken system?

On a personal note: probably no posts for a week or so

Forgive me if this gets too personal. It’s just that we are just about 18 hours away from major surgery on my special needs daughter, and I need to get some community support. There are a lot of “on the other hands” here. It is major surgery. On the other hand, it’s not uncommon (scoliosis surgery), and the doctors have done a lot of them. On the other hand, Hannah has medical issues that no one else has ever seen before. In the best of circumstances, unforeseen things happen. In these circumstances “foreseen” doesn’t mean much anyway.

Bottom line: I’m scared. I’m at work, and I’m getting my work done (and doing a good job of it, I might add), but every once in awhile the freakout wells up and it’s all I can do to contain it.

So whatever your spiritual bent might be, please, for Hannah and for us who will have to wait an unbearable few hours tomorrow, offer a prayer, chant, light a candle, sacrifice a chicken, meditate, sing, whirl, talk to your spirit guide, send out good thoughts, offer metta, or whatever it is you do. I think support in any form has no downside.

Please excuse me now–I need to go someplace quiet for a few minutes.

So who am I today?

The temptation is great in this day and age to open a bio template and adapt it to whatever the current bio request may be. After all, most of us have numerous copies of vita-type info sitting around on hard drives, and it’s easy to just drop one in and adapt it. The Digital Storytelling course seems to me, in part, to be about rethinking how we communicate in the current technological reality, and so I wanted to not yield to that temptation. END_OF_DOCUMENT_TOKEN_TO_BE_REPLACED