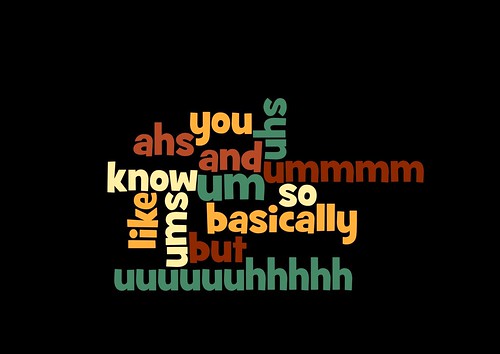 You don’t notice when people don’t say “um” and “uh” and “you know.” When they do, though, they can really interfere with listening because they break the flow. Those are the obvious “vocalized pauses,” but there are others that will interfere for a different reason, and they can be even harder for a speaker to notice and eliminate.

The first step in dealing with them is recognizing them. Let’s look at three classes of vocalized pauses.

We all recognize these, though they can be hard to stop. The most common of these are “um,” “uh,” and “ah.” I’m not going to bother to try to come up with all the spelling variants. We recognize these are just sounds, not words. I once saw an article attempting to differentiate the psychological implications for the speaker for people who say “um” versus “uh.” I don’t think it matters. They break the flow, and although everyone will say one of these occasionally, they become a problem when they form a pattern.

Harder to spot than grunts, these are still fairly obvious because they don’t serve any purpose in a sentence. “Like” and “you know” are the most common here. They’re a little harder to catch because they are real words, and occasionally they actually do serve a purpose–like when you are trying to say something is similar to something else, you know that it’s OK to say “like.” But, like, most of the time, you know, such words are just, like, extraneous.

The final class is probably the most common, but also the hardest to spot. These are real words that often serve a real purpose. The problem isn’t the words themselves, but rather the way you are using them. The most common of these are “and,” “but,” “so,” and “then.” Sometimes you need them–the first two sentences of this paragraph needed “but” for contrast. I’m also not picking at the grammatical constructions my high school English teachers did in proscribing starting sentences with those words, though that’s an argument for another post. Rather, this is the “fear of the period” effect where is seems you fear pausing for breath, so that you throw in these connective words just so you won’t have to stop for a second, because perhaps if you do someone else will take advantage of it to start talking, which makes me think that it may be more prevalent among people who grow up in large families who knew that if they ever paused for breath, someone else would jump in, so they just keep talking without pause so that it makes you wonder where they are managing to take a breath, and the whole speech becomes all one, big, long, sentence, like a William Faulkner novel, but it’s all done out loud, and audiences won’t even realize you are doing this, so they will just follow along and wonder why they are exhausted.

That’s hard to read, isn’t it? It’s even harder to listen to, though most people won’t know why. Because they are real words, and because we don’t see “punctuation” out loud, speakers can really be challenged by this one.

Record yourself. That is the easiest way for you to hear yourself as the audience hears you. It will give your subconscious the feedback loop that will raise your awareness enough for the problem to almost fix itself. Of course, to really work on this you will need to play back the recording paying particular attention to these patterns. For the most part, audiences won’t know that you are leaving out vocalized pauses. They will just know that you sound more confident, and that they are able to follow you more easily. It’s worth the effort to catch and eliminate those vocalized pauses.