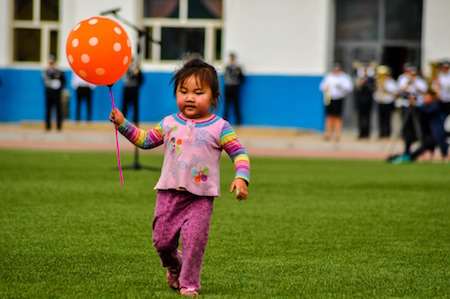 I am almost four years old. The scene is as vivid and real as a memory from last week, in full color as it plays in my head. I am riding in the back seat (no seat belts in those days), and I have gotten a maroon-colored balloon somewhere–I have no idea where–and we are traveling down a highway that is under construction. I have the vague sense that we have been to Reelfoot Lake, but I’m not sure. I just know that I love that balloon. It is the coolest thing in the world–no helium, but still cool.

My mother, playing with me, takes the balloon from me and wraps the string around one of the knobs in the middle of the dashboard. It bobs around crazily in the breeze coming from the open windows at highway speed–probably only 45 MPH or so, but I remember the roar.

Suddenly, the string comes loose. I utter a four-year-old’s scream and look out the back window of the car to see the balloon settle to the roadway, and then a man in a hard hat comes out from behind a barrier, picks up the balloon without looking our way, and disappears again behind the barrier, carrying my balloon.

I continue to wail, my mother is saying something to Dad and to me that I can’t understand, I’m shouting that we have to go back, that man has my balloon, and Dad keeps going–maybe because of the traffic in the construction zone, maybe because it’s been a long day and he wants to get home, I have no idea, but he keeps going.

I am not ashamed to tell you that tears well in my eyes right now as I relive that scene. It might as well have just happened.

For years after that, I was completely unable to pop a balloon or otherwise take part in one’s destruction. When my own kids got balloons (by that time, helium was pretty much the standard), they stayed around until they had completely deflated naturally.

I remember a balloon that belonged to my oldest (now 33, but she was about 7 at the time) made of mylar so it lost its helium slowly over time. It reached a state of equilibrium without enough helium to float to the ceiling, but too much to go to the floor. It hung right at head height, and would wander around the house under the influence of central heat and air currents like a lost ghost. I ran into in the middle of the night once going to the bathroom and scared myself to death. But I could not bring myself to dispose of it.

Objects are not just objects. They have the power to evoke responses and emotions. I’ll bet you can remember a balloon or something similar from your childhood. Maybe it’s a particular smell that brings back an entire scene, or a song on the radio. The reason these things are so evocative is because of the way they connect with us through our senses.

When you want to move people, whether in writing or in speaking, don’t miss the opportunity to make use of objects. It might be an actual object that you bring on stage with you, but more commonly it is an object or experience that you arouse in the mind of your audience through your descriptions. Engage at least three of the five senses, and you put the audience right into the scene, helping them experience it as clearly as I experienced that trip back to 1959.

Your words have the power to create objects and experiences in the minds of your readers and listeners. Give them that experience. You will see it on their faces.

Audiences don’t move until they are moved. You can move them with words that evoke.