I’ve put off commenting on this controversy, mainly because I have no interest in taking part in whatever the current social media flavor-of-the-month might be. But this particular one is continuing, and the discussion almost inevitably neglects to take into account a basic principle of communication, a neglect that not only fuels controversy, but fuels violence.

Alfred Korzybski in particular made us aware of this basic principle through his insights in the field that became known as general semantics.

General semantics involves a lot of insights, actually, but the one I’m focusing on today is this: the map is not the territory.

When we’re talking about literal maps, of course, nobody makes that mistake. But Korzybski rightly pointed out that words are symbols that stand for things–they are not the things.

For instance, if you saw the following on a map, what would the blue symbols “mean”? 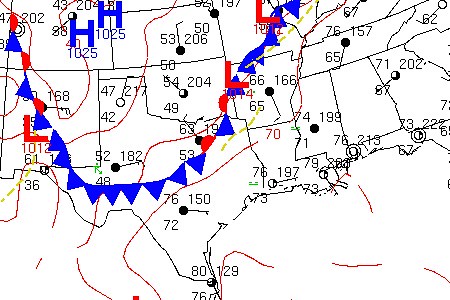 Answer: it depends. On a typical map, you would look at the “legend.” It’s true that such is generally recognized as a front on a weather map. But it can mean whatever the mapmaker wants it to. Maybe in this case, it represents the route of a circus train. I don’t know.

Let’s get a little edgier. What does this symbol “mean”? 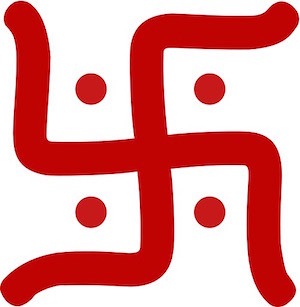 Answer: it depends. For most of recorded history, the svastika (as it was called in Sanskrit) was a sacred and auspicious symbol in Hinduism and Buddhism, and it continues to be used that way within the context of those religions. But most people living in the modern world probably see it and think of hate since it was adopted by the Nazis.

A friend of mine, a music teacher (whom I will mention again in a moment), told me about a student of hers of Korean heritage who habitually wore a necklace with the tetraskelion (another name for this symbol) on it. In her words:

[I was] VERY surprised and more than a bit curious. I asked why she wore it. She replied, “Oh, yeah, a lot of people think of the Nazis–it’s actually a Buddhist symbol.” I was, of course, relieved, but also a bit disappointed that I didn’t know the symbol had a different meaning for specific people groups.

Which brings us to the current controversy: what does the so-called “Confederate Flag” “mean”?

By the way, if you think this is heading in the direction of arguing to “keep” the “Confederate Flag,” you’re wrong. I don’t care which side of that controversy you are on. But I hope you continue to read a bit more, because I think it matters how we approach the controversy.

Back to our regular schedule

But it’s frankly ignorant for anyone (including me) to tell someone who chooses to display that flag or any other what it “means.” To me, it is not only a symbol of Southern pride, but of Southern solidarity. Just as the swastika in the context of a Buddhist or Hindu ceremony means something very different than in the context of a white supremacist meeting, the battle flag means something very different on the back of someone’s truck than it does at a meeting of the Ku Klux Klan. (Or maybe not. That’s the problem with symbols.)

I would assume that is true of other people as well. In fact, I can point to at least two people of African heritage who have made videos saying the same thing (i.e., that the battle flag or any other Confederate flag represents Southern pride, including their own).

I purposely did not link to those videos, though, because it seems to me that even those videos feed into the whole underlying assumption that this is a race thing. The fact is, for many people it is exactly that. For many others (of both African and European heritage), it is not. It is ridiculous for me to tell either faction that it is or it isn’t, since the symbol means absolutely nothing by itself.

Because I know my own point of view is limited, I ran an early draft of this post by that friend I mentioned earlier–not that I wanted her to speak for an entire group of people, but I wanted her take on it. She is not just of African heritage. If we need to put labels, then she is a young (relative to me) single childless female adjunct faculty member (at a community college) of African heritage from (I think) North Carolina who likes Doctor Who as much or more than me, and who is really into a music group called Muse. That means we share many items of identity, and also differ on many. I am an old (relative to dirt) married (with children) male full-time faculty member (at a community college) of predominantly European heritage from West Tennessee who likes Doctor Who, and I’m really into Creedence. And I have a disabled child.

When we talk about any number of subjects, therefore, I learn from her, and she says she learns from me.

Among other things, she said that the Confederate flag does represent for her a time of hate, but she also knows there are people of both African and European ancestry who feel that it represents their heritage in a positive light.

I still choose not to display it, out of concern for not only this friend, but others, of whatever heritage, lest my intent be misunderstood. I’m concerned, though, that we’re missing a bigger problem.

The real danger: categories rather than people

As long as we stand across whatever aisle there might be and simply shout at each other, believing the other to be stupid or evil, this problem is never going to resolve itself.

If we can, without batting an eye, make a statement about all Democrats or all Republicans, about Christians or Muslims or atheists (or any other religious label), about blacks or whites, about Southerners or (ahem) Yankees, about rich people or poor people, then we are part of the problem.

There is no doubt this is a Southern symbol. If you think this symbol represents racism, and you think racism is a characteristic of the South, then you are sadly misled. This is a red herring distracting you from more profound and less easily addressed human characteristics. If you think that rehashing what the Civil War was “about” is somehow absolving you of the need to examine your own prejudices and ways of treating other people because you are so superior to the people of that time (and by the way, if you didn’t know, the Union was just as racist), then you are fooling yourself.

I am disturbed by much of this, but one of the more profoundly disturbing aspects of this is the tendency I’m seeing on social media where people invite others who disagree to “unfriend me.” “If you do X, then just unfriend me right now.” If we only ever talk to people with whom we agree, no growth is possible. Who knows, I might change my mind? Or the other person might change his/her mind. But in any case, it helps me to see the issue from another point of view, and it helps the other person as well.

This is closely related to the attempt to simply shut down disagreement. Honestly, I have seen probably ten times more Confederate battle flags flying from the back of (usually) trucks in the last week than I have seen in a year. I do not believe most of these folks openly flying that flag hate people of African ancestry. (At least one driver appeared to be of that ancestry himself.) I think most of them are simply pushing back against a perceived attempt to tell them what they cannot do.

In other words, the attempt to ban that flag is making the problem worse, not better.

Within a communication context, there will be a Part 2 and a Part 3 addressing that whole “what was it about” thing, and the concept of racism. I’ll link to them from here when they’re ready. In the meantime, I hope you will consider listening to someone with whom you disagree, and when they tell you what something means to them, believe them.