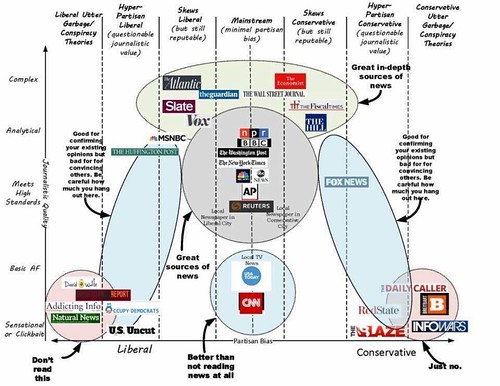 Are you sick of hearing about “fake news”? I am. The term has been rendered useless, devolving into an empty rhetorical device. People on both sides of the political divide have taken to simply calling something they disagree with “fake news,” as seen in a recent exchange on CNN. Here’s a hint: using that term now labels you as a shallow parrot.

Certainly, there are all levels of news quality. The media has never been unbiased, but it has traditionally striven to achieve balance (which is not the same thing). In the most comprehensive study, now over 10 years old, the media certainly had a liberal bias, though not as badly as many people assume. Certainly in the last few years, we have seen a splintering along the left/right divide, but also along a spectrum from high quality to clickbait, which is what the chart featured above tries to address.

The chart has gotten a lot of attention lately, and its originator, Vanessa Otero, has explained all of the factors and assumptions that went into the placement of the various media outlets. Whether you agree with her assessment or not, it should be obvious to anyone that trying to force media outlets into “real news” and “fake news” is ridiculously simplistic.

I admit a certain irony involved in the perpetrators of much that was simply false (but promulgated as “news”) now being the ones to label news stories with which they disagree as fake news. However, I will go back to the depression I suffered prior to the election with the realization that we were, as a nation, asked to choose which liar we wanted in office. As I said then: when you vote for the lesser of two evils, you still wind up with evil. So please note I would be saying the same thing if the other “side” had won.

At least recognize what you are doing: when you reject a news story from a legitimate news outlet because you disagree with it, and call it “fake news,” you absolve yourself of the need to consider it. You foster confirmation bias. You do the same thing when you pronounce the stuff you agree with “real news.”

For any source of information, you need to ask what factors could skew the point of view, perhaps especially those you agree with. Take everything with a grain of salt, but reject nothing out of hand. Certainly, time is limited. But if you will be anything other than an automaton, it will take time. As one of the 2005 study’s authors said, “If viewers spent an equal amount of time watching Fox’s ‘Special Report’ as ABC’s’World News’ and NBC’s ‘Nightly News,’ then they would receive a nearly perfectly balanced version of the news.”

Obviously, we can legitimately talk about “low quality” news. But if you want to be taken seriously, you might want to start avoiding calling stories from major news outlets “fake news,” regardless of this side of the political bread you butter.