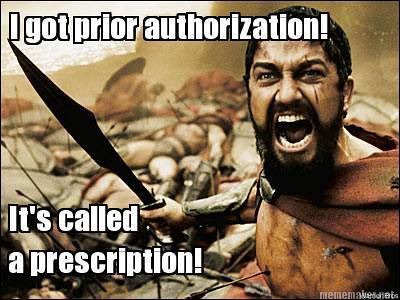 You have once more taken me on a journey of cognitive dissonance. When I went to the pharmacy to pick up my daughter’s new anti-seizure medication, they told me they couldn’t release it yet because you were requiring “prior authorization from the doctor.” Here’s the thing: A medical professional evaluated my daughter’s symptoms, considered all his options, and decided this medicine was the best way to address them. That’s about as close to prior authorization as any reasonable person would require.

But wait, I’m not dealing with a reasonable person, am I? I assume I am dealing with a bean-counter who is either second-guessing the medical professional (“Maybe there is something cheaper you could prescribe instead?”) or else hoping that I will decide what the heck, I didn’t really want to get the medicine anyway, and I will give up.

Neither of these things is going to happen. I am determined to get my daughter what she needs, and the medical doctor, for some reason, still thinks his professional training is better informed than your bean-counting. So thanks to you, as we approach a weekend, chances are that my daughter will have to endure four or five more days of seizures than she otherwise would have. Way to go, “insurance” company.

Instead of saving money, you have cost money, since the doctor and his staff will now have to go through more useless paperwork and time that could have been spent on little things like saving lives. But after all, you have ensured a job for several paper pushers, so I’ll bet you’re going to sleep well tonight. That’s a good thing. Someone should sleep well tonight, and it ain’t gonna be me.

P.S. Congratulations on scamming the government on requiring your “service” to be bought, and even to pay for it if need be. After all, why should you have to earn patronage through, I don’t know, maybe, perhaps providing a service that people actually want? Plus, extra points: since you have confused everyone by calling what you do “insurance,” no true insurance was available for me to be able to protect our family against the genuinely potentially devastating event of a child with life-threatening ongoing medical issues. In fact, one of the first things you did when the full nature of my daughter’s one-in-350-million genetic defect came to light was to attempt to deny her the care that keeps her alive. That makes me completely dependent on a bureaucratic machinery incapable of providing real, meaningful mitigation. So much for insurance. Given the amazing amount of flimflammery involved in that con game, it should not surprise me that you have also managed to make an entire society forget that a prescription is a prior authorization and to meekly ask their doctor to answer the question, “Are you sure about that, doc?” I mean, really, that’s just bonus, right?

P.P.S. This isn’t about politics. It’s about just being over being a host animal.

Some advice about giving advice
Logging In...