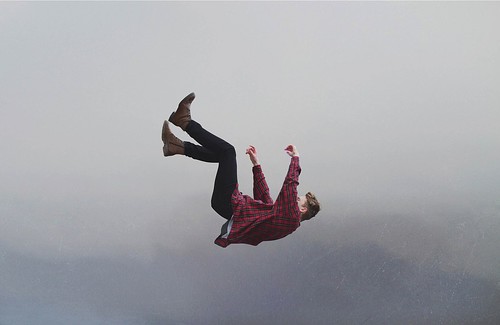 When I was a kid, one of my good friends was Steve Reid. Steve later went on to be a successful musician in Memphis, Tennessee, though he passed away unexpectedly two years ago. We lost touch over the years but thankfully reconnected before he left this earth.

As a working musician, Steve certainly knew how to keep going despite failure. We never talked about it, but I know the life of a musician is hard–constantly hustling to get the gigs, to make a living, to keep the vibe going.

Long before he became a musician, he told me about a game he and his dad, Hughes Reid, used to play. When Steve was just a toddler he loved to climb up on the top bunk, shout, “Catch me, Daddy!” and jump off into Mr. Reid’s waiting arms.

One night he sort of woke up about 3 a.m. Sleepy, groggy, perhaps continuing in real life what he had been dreaming about, little Steve stood up, shouted, “Catch me, Daddy!” and jumped. Whump. No daddy there at that moment–Mr. Reid was asleep in the other room, like any sensible person.

The fall hurt, but as I recall Steve had no significant injury. However, he learned something about heights in the process. One of the first things I learned in martial arts years ago was how to fall without getting hurt.

It’s dangerous to make sweeping generalizations about a whole generation of people. Remember that statistical trends tell you nothing about a given individual who happens to fit within a definable group. Still, it’s worth observing, I think: I’m seeing a generation of people who come to college less able to tolerate failure.

Some of this is driven by the college system itself. Students say, “I don’t want to have to take a speech class; I don’t know how to give a speech.” On the one hand, this seems nonsensical–if you already knew how you wouldn’t need to take the class. But I know what they often really mean: if I don’t know I can make an A in it I can’t risk taking it, because it could cause me to lose my scholarship.

But there’s more to it than that. I think we (the royal we–we as a society) have let down a whole generation of people by protecting them from failure. I don’t mean to glorify failure–no doubt, it sucks, and winning is better. But failure is part of the road to success. If you’re afraid to fail, you won’t do what is necessary to succeed.

I’m not suggesting we seek out failure. If you’re really growing, failure will come along naturally. Rather, let’s do everything we can to avoid failure, except to fail to try. When we fail, let’s learn from it. Then let’s move on. It takes experience to figure out when failure means “keep trying” and when it means “this is not for you–refocus.” We’ll never learn to make that distinction until we learn to risk failure.

How have you learned to face risk?